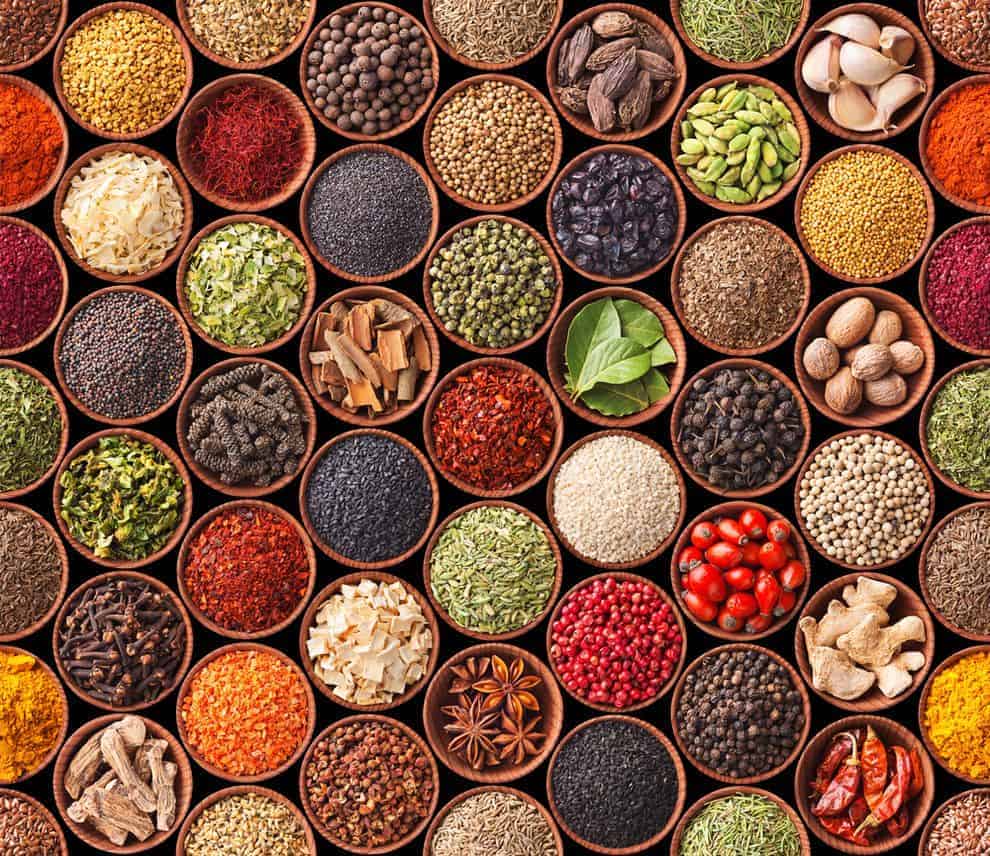 Spices do much More than just Add Zest to any Meal!
Spices are becoming a Staple Ingredient of More Healthy Spa Treatments.

When most people think of spices, they conjure up visions of fiery Indian dishes which light up taste buds with a vengeance for those unaccustomed to their zealous use in cooking. However, experienced chefs skillfully use spices to enhance the flavors in all sorts of dishes, from appetizers to desserts. The blend of spices is often so subtle that diners don’t even realize they have been added.

In addition to their culinary value, spices and herbs were used by ancient civilizations for medical and cosmetic applications. Yet, today these humble ingredients are not completely understood, much less fully appreciated.

THE DIFFERENCE BETWEEN SPICES AND HERBS

Many people don’t even understand the difference between spices and herbs. By definition, herbs are the leafy parts of plants and shrubs used to enhance the flavor or taste of foods, augment cosmetics, preserve foods, cure or prevent illness, and in the essence of oils harvested for body care products. Some of the most well-known herbs come from the leafy parts of the ginger, parsley, rosemary, sage, thyme, oregano, lavender and cilantro plants.
In contrast, spices are harvested from the flowers, seeds, berries, flowers bark and roots of plants or trees. For example cinnamon derives from the bark; coriander from the seed of the cilantro plant; and cloves, saffron and ginger from the roots. Your eyes are not deceiving you – ginger is listed as both a spice and a herb. Cilantro is another cross-over with the leaves of the plant a herb and the seed a spice known as coriander.

Many people are also not aware of nor respect the powerful antibacterial, antiviral and antioxidant properties of spices. Many are high in B-vitamins and trace minerals, as well. Sea salt which is harvested on one of Bali’s most famous beaches, Amed, contains a whopping 93 trace minerals. Salt never tasted so guilt free!

Most spices contain more disease-fighting antioxidants than fruits and vegetables, so spice your life up and live longer. To name just a few;

• Ginger has a potent flavor that is great for warming your body and adding zest to meals. Its medicinal properties can reduce nausea, motion sickness and other stomach upsets including morning sickness. It also has anti-inflammatory properties, eliminates intestinal gas, relieves dizziness and boosts the immune system.
• Galangal Ginger is predominantly grown in South East Asia and is a very popular flavoring agent there. There are four variants – Chinese, Greater Galangal, Lesser Galangal and Sand Ginger. Its seeds, oil and more have also been widely used in herbal medicine for ages in this region, as well as the Middle East and India. It helps reduce stomach and abdomen discomfort, promotes blood circulation, provides immediate relief from diarrhea, and can eliminate sea and motion sickness. With 40 antioxidants, it also prevents free radicals from damaging skin, thus protecting it from aging. Fresh juice or slices can be applied topically to treat certain skin diseases and burns, as well as serve as an antiseptic for blemish-free skin. 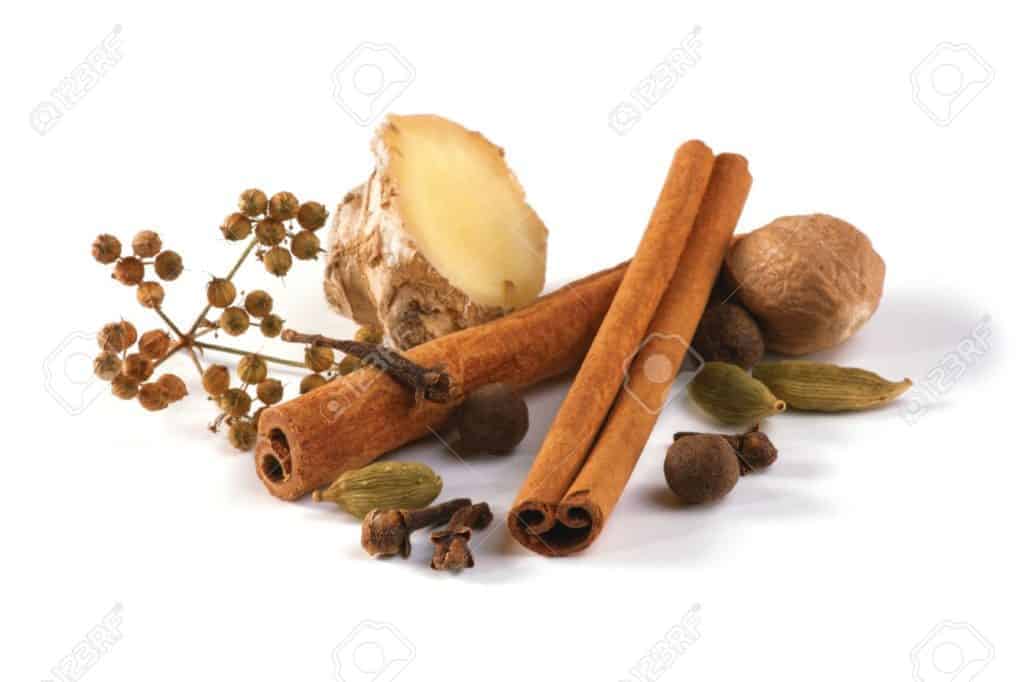 • Cloves have a combination of sweet and spicy aromatic flavors that makes for a great complement in many foods. It is popular in Asia for its ability to relieve tooth and gum pain, but it has many benefits beyond this such as relief from respiratory ailments such as asthma and bronchitis; general pain reduction for injuries, arthritis and rheumatism; and elimination of intestinal parasites, fungi and bacteria.
• Nutmeg is another spice that has a variety of healing properties. It is useful for insomnia, anxiety and calming muscle spasms.
• Cinnamon which everyone knows for its use in cinnamon buns and sprinkles on cappuccino foam has the highest antioxidant value of any spice, and is rich in manganese, iron and calcium. It has been shown to lower blood sugar and blood triglyceride levels.
• Tumeric is found in kitchens around the world, yet most commonly associated with Asian menu staples. It contains curcumin, a cancer-fighting compound, and is taken medicinally to reduce inflammation and improve joint mobility.
• Candlenuts are high in protein, carbohydrates and fat, however these are unsaturated fats that reduce LDL levels and help prevent blood clots. They are also high in minerals. The pulped seed kernels are used in poultices to relieve headaches, fevers, swollen joints and sores and ulcers on the skin. The leaves have pain-killing properties believed to be due to their high flavonoid content.

THE HISTORY OF THE SPICE TRADE IN INDONESIA

It is no wonder that these minuscule gems of taste, nutrition and healing impact were highly sought after by those in the East and later the West. A small group of islands in the far north-east between the Celebes and New Guinea were once the world’s largest producers of mace, nutmeg, cloves and pepper. There was thus a thriving trade in spices within the Far East for centuries before European vessels arrived in the Indian Ocean in 1498. The Portuguese began buying spices directly from what by then was called the Spice Islands as early as the 1520. Dutch and English ships did not reach the islands for another 80 years, giving the Portuguese strong control of the trade. Its rich bounty of spices forever changed the archipelago’s future as these diverse traders brought with them their religion, culture and lifestyles.

The vast Indonesian archipelago is also the birthplace of many lesser known spice-based products that enrich beauty, health and well-being. Many of today’s natural treatments for hair, skin, and even medical cures can be found in the vast botanical variety of Indonesia’s 6,500 species, almost 70% of which are native to Java. Some of the beauty treatments that are in use today were once guarded secrets within the palace walls of the Central Javanese royal family and are just recently becoming known to the public.

One of the most successful beauty product brands in Indonesia, Mustika Ratu, originated from a royal Javanese princess who at a young age learned from her grandparents how certain plants could impart their restorative powers to those who use them in royal rituals. She is just one of a growing number of individuals creatively using spices for skin and health rejuvenation. This trend is beginning to disseminate to a wider audience whom are increasingly focused on appearance, longevity and inner tranquility.

And the medical establishment is scientifically proving that many ingredients and techniques that were once considered Asian folklore may have real merit at a fraction of the cost of synthetic drugs. With their antioxidant properties, spices are ideal for disease prevention. Nutmeg, ginger, cumin, black pepper and coriander, for example, have been shown to help block the effects of antitoxin, a mold that can cause liver cancer. Some spices even appear to be capable of killing diseased cells outright. In laboratory studies compounds from saffron were placed on human cancer cells, including cells that cause leukemia. Not only do the dangerous cells stop growing, but the compounds appeared to have no effect on normal, healthy cells. In Japan, candlenut tree bark is being researched as a seemingly effective means to heal tumors.

There are so many potential benefits for a healthier life as scientists continue to study the medicinal properties of spices.

WHY SPICES FOR SPA TREATMENTS

Nowadays the use of herbs and spices in spa treatments is becoming more wide-spread, especially in top Asian spas where natural health and wellness traditions have a very long history. Spa enthusiasts are experiencing for themselves the amazing benefits to skin and general health that spices can impart. Miraculous properties which abound in these spices can prevent and resolve issues in safe, secure and natural ways. An added plus is they feel really great too in all sorts of bodywork and spa treatments. 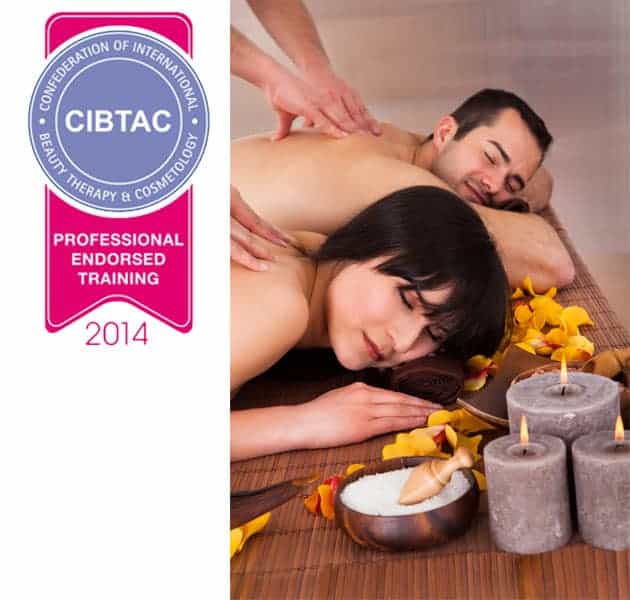 Recognizing the growing demand for spice-based spa treatments, Bali BISA developed its own ‘Spice Islands’ program that was later endorsed by CIBTAC due to its quality training methods.

The entire program is based on authenticity of presentation, ingredients and techniques. The core ingredients are prepared in a Balinese dulang, a platter mounted on a pedestal that has traditionally been used for offerings and as serving dishes for meals. Students are taught how to display the ingredients, so that their spa clients fully appreciate their natural greatness.

A customized Spice Island Massage for males and females is the cornerstone of this varied program. The male relaxes with oil blended from ginger, lemon grass and vetivert while wrapped in a blanket. At the same time his partner is massaged from toe to head while inhaling the aroma from a tropical blend of ylang ylang, frangipani and cempaka flowers. After the massage, both soak in a bath of paan which re the aromatic leaves of the betel vine. A choice of a herbal wedang or jamu drink is offered as an energy restorative end to this unique massage.

For further pampering for the female, students learn how to give a Tropical Nut Scrub using candle nuts and cinnamon. Candle nuts are very rich in oil, making them excellent for dry and sensitive skin. Cinnamon warms up the body and stimulates the digestive system. The combination scrub leaves skin soft and moisturized, and the body tingling with warmth.

Fresh spices, indigenous to Indonesia, specifically ginger, galangal ginger and lemon grass, are mixed with rice flour to create glowing skin in the Spice Wrap especially created for men. The blend also reduces symptoms of the flu and colds.

While the spices and herbs are being absorbed into the pores, the client will enjoy a 25 minute face and head massage. Herbal packs are placed just above the nose so the aroma is not too strong. They are then pounded and circled around the face before warm and cold chakra stones are used for a totally different sensation. Afterwards coconut oil is massaged into key points on the head to induce a deep state of relaxation.