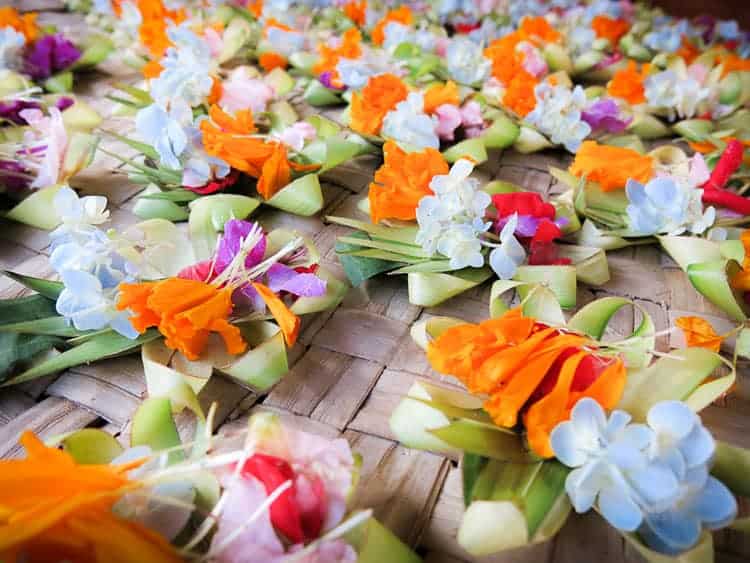 Wonderfully decorative and colorful offerings are a special feature of the Balinese culture. Canang sari is the simplest form of banten (offering) and is often seen at the front of houses, stores, temples or simply placed on the ground. The basic ingredients of canang sari are mostly the same, but the resources and the creativity of the people that make them can take different forms, such as the Badung style, Tabanan style, and the Gianyar style, or even some styles that originate in Java. In many cases the size of canang sari is related to the purpose of the event, for daily use they are smaller, while for important ceremonies or celebrations the offerings are made much larger and more decorative.

Canang sari is a small square or round basket made of palm or coconut leaf, filled with colorful flowers and a small amount of unseen stuffing. Canang Sari is derived from the Balinese words, sari meaning essence, and canang a small palm-leaf basket or tray. The word canang itself consists of two Sanskrit syllables, ca (beautiful) and nang (purpose). Canang Sari is offered every day as a form of gratitude to the Balinese god Sang Hyang Widhi for the peace that is bestowed upon the world. The colors of the flowers are white, red, yellow, blue or green, and are not randomly chosen; they have different meanings, and are placed according to the cardinal directions.

Other than the colorful flowers canang sari includes peporosan, ceper, raka-raka, and sampian urasari. Peporosan, the core materials are comprised of betel leaf, lime, gambier, tobacco and betel nuts, and symbolize the Trimurti. Shi-va is symbolized by lime, Vishnu by the betel nut, and gambier symbolizes Brahma. Ceper, the tray made from palm leaf which contains the canang sari is a symbol of Ardha Candra (the earth and the moon).Raka-raka is topped with sampian urasari symbolizing the stars, which in turn is overlaid by the flowers placed in specific directions. The offering is completed by placing an amount of kepeng (old Chinese coins) or paper money, which is said to make up the essence (the“sari”), on the top of the offering. There are several different types of canang, such as canang sari, canang meraka, canang pesucian, canang pengraos, canang genten, canang gede, canang tangkih, canang yase and canag lenggawangi.