Parents of Balinese families have the added responsibility to teach their children some basic skills of traditional Balinese medicine using domestic herbs and spices, along with therapies for simple ailments. Such knowledge is inherited and has been passed down from generation to generation for centuries. Every family compound is advised to plant their own living apothecary that is a collection of the basic healing herbs and shrubs. For more serious illnesses, both physical and mental, families normally consult the village healer, or Balian, who will help them with guidance. A Balian is often equipped with a supernatural powers, rather than just relying on their knowledge and experience.

Throughout Indonesia there are many different types of herbal drinks called jamu which are used to prevent and treat different ailments. Loloh is herbal drink produced and consumed in Bali where leaves or roots are crushed and mixed with water.  Many different ingredients are used in the making of loloh, depending on the patient’s complaint. The most common ingredients are: loloh temu (a variety of roots), loloh kayumanis (cinnamon), loloh sembung, loloh cemcem, loloh beluntas (Plucheae Folium) and loloh sirih (piper bettle). 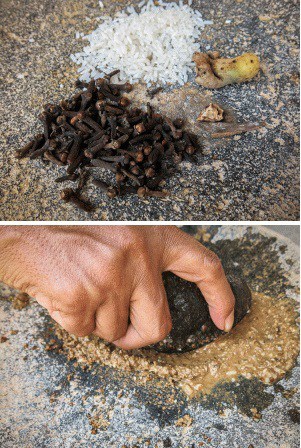 Boreh is another type of herbal medicine that is also a concoction of natural ingredients, such as roots (bebungkilan), leaves (daun-daunan), rice, flowers, fruits, herbs, and spices. There are a number of different roots that are used to make boreh – cekuh (lesser galanga), temutis (a type of turmeric), jahe (ginger), kunyit (turmeric), and isen (alpina galanga). The common herbs and spices chosen are cengkeh (cloves), sepet-sepet, jebug garum (nutmeg), merica (pepper), and tabia buun (a dried type of challis), and sometimes these ingredients are mixed with bark from a mesui tree. All the ingredients are dried first and then ground with water using a mortar and pestle (penguyegan) to create a yellowy brown paste. Balinese use boreh to warm a patient’s body and it is most commonly administered to the skin of people who have a fever, headache or complain about stiff joints, aches and pains. Sometimes arak or rice wine is added to boreh.

Simbuh is similar to Boreh but simpler and quicker to make, and is applied to babies. It is a mixture of rice, roots or herbs that is chewed until soft and then blown onto the skin. During periods of cooler weather the Balinese like to keep their children’s bodies at an even temperature by using this unique herbal remedy. However unlike Loloh and Boreh, nowadays this technique is rarely used.

Balinese massage is well known as one of the best techniques in the global spa industry, and in holistic healing it plays an important role in aiding a patient’s recovery. The aim of traditional massage is to restore the balance between body and soul, while massage keeps the limbs supple and the skin soft. Skillful masseurs are also adept at realigning dislocated joints and exorcising “chronic fatigue syndrome”. During this process, a masseur often uses coconut oil, sometimes mixed with herbs and spices, depending on the patient’s condition.

The Balinese strongly believe in the unseen or psychic world called niskala. Often a sickness is caused by human-perpetrated black magic, or it is the workings of a mistreated or unhappy ancestor.  It is the Balian’s task to help restore a patient’s balance. Often the problem lies with the ancestors who can cause mischief, or indeed real harm if not appeased regularly with their favorite treats and offerings. The Balian may go into a trance to discover the root cause of the problem, and then either give the patient plant medicine, a massage or a list of offerings to be made. It is no secret that Balinese often hear about psychic wars between a Balian and his patient’s counterparts, especially when the patient’s sickness is caused by black magic.